Photo by Thomas Kelley on Unsplash 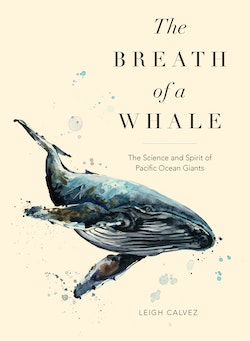 The Breath of a Whale

The first time I saw a whale, it was a sunny summer day off the coast of Gloucester, Massachusetts — the whale spotting capital of New England. Rocking gently with the boat, my eyes glued to binoculars, it took a long minute before I was confident the spray I saw was, in fact, a whale's spout. When a whale breached a few minutes later, the other tourists on the whale-watching tour buzzed with excitement, and the tour operators exuded a palpable relief.

The naturalist Leigh Calvez also saw her first humpback whale off the coast of Gloucester, and adroitly captures the admiration and curiosity these giants can provoke in her new book, The Breath of a Whale. Part scientific exploration and part emotional narrative, Calvez weaves scientific research with her own personal journey from her days as a naturalist and science writer.

The book focuses on six species of whales — humpback whales, blue whales, gray whales, beaked whales, false killer whales, and orcas. She explores the habits and history of each species, including their complicated relationship with humans. Gray whales, as Calvez explains, were completely eliminated from the east coast, and nearly exterminated in the Pacific. Although commercial killing of whales was officially halted by the majority of countries in 1982, the practice continues—Norway and Iceland continue to allow commercial whaling, and Japan catches whales under the guise of scientific whaling. Indigenous communities in four countries, including the United States, also still hunt whales to support their families. (This type of subsistence whaling maintains indigenous cultures but specifies a catch limit, updated every six years, by the International Whaling Commission.)

But if you want to read a hard-hitting book about past and current whaling, this isn’t it. Breath of a Whale barely skirts these topics. Instead, Calvez explores newer cetacean research and our evolving human connection with them. For example, she describes research on low-frequency active (LFA) sonar tests, which disturb wintering humpback whales off the coast of Hawaii. Calvez, then a young scientist monitoring whales, recalls noticing a distressed calf, separated from its mother by underwater noise pollution during military sonar tests. The mother-calf bond is critical, and Calvez observed a total disruption in normal behavior because of the sonar tests. She reported it, but her observations were dismissed. Her feeling of helplessness ultimately led her away from science. (Further studies since then have confirmed that the US Navy’s sonar can cause whale deaths, and otherwise disrupt whale behavior.)

Throughout the book, Calvez has keen descriptions of whales' advanced social behavior. Free Willy-fame aside, the importance of the family pod in a whale’s life is difficult to overstate. Orcas in particular have strong familial ties, living in groups with their mothers and sisters. Orca social structures are complex, with some populations remaining in a small area—known as “residents”—and some migrating. This complicates research and conservation efforts. Off the coast of British Columbia in the Salish Sea, for instance, Calvez describes how the southern resident population is in decline, with no births for over three years, while the transient population has actually increased. That's in part because the southern residents’ preferred food, Chinook salmon, has declined drastically. The human impacts, like industrial dumping, runoff, and leaching chemicals into the ocean, also contribute to the problem. (In fact, half of the world's orcas could disappear because of pollution.)

Some of the most striking sections in the book stem from Calvez' remarkable ability to humanize scientific research itself. Scientists attempting to study whales can spend days, months, and even years without catching a glimpse of their study species. Remarkably difficult to study, a single whale can travel thousands of miles a year, and spend a large portion of their time under water.  As a researcher studying how seabirds find food, I can appreciate the huge challenges these whale researchers face. I can walk up to a nest, pick up a bird, and attach a GPS in less than 10 minutes. Whales surface to breathe for sometimes only seconds, so scientists have to be poised and ready to attach a GPS to a whale's back with a giant suction cup at a moment's notice. Calvez explains how new techniques—like using GPS satellite loggers—are now helping scientists better understand whale movements, and recording the incredibly deep depths of their dives.

Though she does a good job explaining the nuts and bolts of cetacean research, equally interesting are the scenes where Calvez shows the connection between whale and human emotions. Just like elephants suffer from PTSD, Calvez argues that whales also experience distress and depression after traumatic events. Since gray whales can live as long as 70 years, she muses that gray whale calves born during the 1960s—when over 300 gray whales were killed off California—could still be alive and swimming with the trauma of those hunts. (Researchers now believe that Tilikum, the infamous Sea World orca that killed his trainer, exhibited symptoms of PTSD.)

Calvez, in fact, twines her own life story around that of Springer, an orphaned orca calf who appeared in the Puget Sound in early 2002. Springer became separated from her pod after her mother died in late 2001. (NOAA orchestrated an attempt to reunite the struggling calf with her family in summer 2002—a complicated operation that was ultimately a success.) Like Springer's community came together to care for this orphan, Calvez chronicles how her own community cared for her when she fell into a coma on the very same day that an oil spill poisoned the Puget Sound in 2004.

Breath of a Whale isn't trying to be comprehensive—and I found myself wanting more information, not only on the whale species she introduces, but also on the ones she doesn't. Right whales, for example, a species of the North Atlantic that produced no offspring in 2017, didn’t even get a mention. As a scientist, the human tendency to anthropomorphize animals is discouraged, and Calvez' passion for whales sometimes distracts from the important science she recounts. Trained to ask questions, I double-checked Calvez's sources as I read the book—but the facts she divulges and the scientific papers she summarizes are all accurate, leaving me eager to learn more.

Even for a skeptic like me, the book’s main success is connecting Calvez' audience to a magnificent creature that so many of us rarely, if ever, see.

There's more than one way to discover a new species

Papers published this year demonstrate the different paths to recognition

Whales molt, and scientists are trying to work out how

Ocean heatwaves like "The Blob" cause lasting damage to marine ecosystems

The oceans contain vast mineral resources. Can the deep sea be mined without catastrophic results?

Scientists studying the 'forever chemicals' say this trend is concerning

Deep sea bacteria use selfishness to their advantage

The secret code of sea shells

Why is this huge group of deep sea octopus moms suffocating?