Is it safe to eat GMO foods?

Here's everything that science tells us 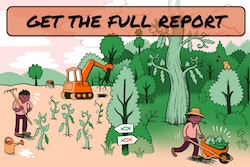 So far, all commercially available GMO crops, anywhere in the world, have been found to be substantially equivalent to their non-GM counterparts. This means that GM plants are just as safe – or unsafe – as non-GM plants of the same species and variety.

Substantial equivalence means that a GM plant is considered as safe as a non-GM version if it meets the following qualifications:

A large part of testing for this standard involves measuring whether the most important nutritional properties of the plant – like dietary fiber, protein, fat, and vitamins – are identical between a GM plant and its non-GM relative.

No GM food available today has been found to promote or cause allergies. In fact, in a 2008 paper published in Nature Biotechnology, a group of allergy and food experts recommended against the current, excessive, allergenicity testing of GMOs.

The relative non-allergenicity of current GMOs isn't surprising. One of the few shared characteristics of allergy-provoking foods is that the specific protein that causes an allergy is present at very high levels. In peanuts, allergy-causing proteins are found at 1,000-10,000 parts per million. In GM crops on the market, the engineered proteins are present at much much lower concentrations, sometimes as much as 100,000 times lower. These facts – GM proteins are present at low levels, don't look anything like the allergy-causing proteins we know of, and have passed repeated testing – suggest that they are very unlikely to cause or promote allergies.

All of this is not to say that GM foods will always be nutritionally identical to their non-GM counterparts. A major goal of making new GMOs is to improve the nutritional content of our most commonly consumed crops. The Golden Rice project, for example, is an attempt to increase the provitamin-A content in the grains of some of the most commonly used rice varieties in Southeast Asia. Other health-promoting GMOs in the pipeline include the Purple Tomato (rich in antioxidants); aflatoxin-free maize (which is free of a dangerous fungal toxin that contaminates a lot of maize plants); iron and zinc rich rice and wheat plants; vitamin-B9 enriched rice; and vitamin-B6 enriched cassava plants designed for African consumers.

The key message when thinking about GMO safety is that the nutritional properties of a plant depend on what genes a plant has, not how they got there. And the properties of individual genes are often not related to the species from which they originally hail. That is to say that a gene from a peanut moved into corn will not make that corn more "peanut-y," or make it allergenic.

In fact, the broad arc of evolution has ensured that a lot of the genes present in different plants and animals are very similar, or perform similar functions. We humans, for example, share 60 percent of our genes with bananas!

Hence, in the Golden Rice project, researchers first took a gene from daffodils and put it into rice to produce provitamin-A, but they were able to reach the same basic result, i.e. provitamin-A rich rice, by using the same gene from maize instead (the maize version of the gene performed a bit better in rice than the daffodil one). It doesn't matter where a gene comes from, we just need to know what it does.

GMOs can help us adapt to climate change

What is genetic modification?

GMOs are better for the environment than you'd think

Using this technique, drought- and pest-resistance genes could be inserted into food crops to make them more productive

To stop pancreatic cancer from spreading, cut out the chatter

Mosquitoes can be genetically engineered to be resistant to malaria