Eighty years after her death, scientists are still processing the plants she collected 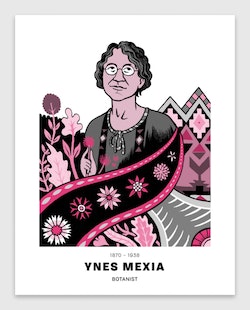 If you've ever tried to press flowers or leaves between pieces of paper, you know that each specimen takes lots of painstaking work. Can you imagine collecting and preserving 150,000 plants, flowers, and leaves? That's exactly what Ynes Mexia did. Mexia was a Mexican-American botanist, but she was also a non-traditional college student, a creative field scientist, and an explorer.

She didn't get started with science until age 51

Mexia lived in many places throughout her life. She was born in 1870, most likely in Washington DC, where her father was a Mexican diplomat. The family moved often, and Mexia lived in Texas, Pennsylvania, Canada, and Mexico before settling in San Francisco in 1908. She moved to California after divorcing her second husband, Agustin de Reygados; her first husband, Herman de Laue, died in 1898.

While living in San Francisco, Mexia went on hikes with the Sierra Club, which brought her peace after the divorce. She became so interested in botany and science that she started taking classes at UC Berkeley in 1921 at the age of 51. She was what we would now call a non-traditional student, taking classes alongside college students 30 years her junior. Though she took many classes over the course of 16 years, she never completed a degree in science.

Her botany career really got started when she began going on botanical expeditions in 1925. On these expeditions, she and her team collected plant specimens and kept detailed notes on their observations. She knew her experience in Mexico would help her as a field scientist there, and returned several times.

She was an adaptable field scientist

During Mexia's impressive career as a natural scientist, she encountered some speed bumps - many of which were the 20th century version of obstacles that modern field scientists experience today. After completing a sampling expedition, she needed a way to get her samples back to California. Instead of dropping them off at the post office, she had to send them to the California Academy of Sciences on a steamship and hope they would make it. She traveled across Nevada, Utah, and Arizona in an open Model T Ford, not a van with four-wheel drive. Her fieldwork took her to remote locations, requiring days or even weeks of travel. On one trip, she traveled up the Amazon River by steamship, canoe, and balsa raft just to reach her site.

Despite these challenges, she collected a mind-blowing number of specimens, including 500 on her very first trip - the same number of specimens that Darwin brought back from his Beagle voyage. Throughout her career, Mexia collected more than 150,000 specimens and more than 500 new species. The total impact of her work is still unknown, as modern botanists are still catching up with all her specimens. Unfortunately, unlike her male contemporaries, she is sometimes referred to as a botanical "collector," rather than being recognized as an accomplished scientist – the scientific equivalent of calling a chef a home cook.

She was an adventurer

Mexia certainly had a strong sense of adventure, and can be considered an explorer and traveler as much as a scientist. She sometimes traveled alone, even on the "most arduous and comfortless" journeys. That level of independence was remarkable in the early 20th century, when married women were not issued their own passports.

Though she was independent, Mexia still liked to share her experiences when she returned. She was a gifted storyteller and could be called an early #scicommer. She gave lectures around San Francisco and wrote accounts of her collecting expeditions for several US-based publications. In a different time, she might have been the Steve Irwin of plants.

Mexia's work made its mark on botany, with specimens she collected now housed in museums across the US and Europe. Almost 100 years after her botany career began, her research is still "integral" to the classification of plants in North America and beyond.

Through meticulous crossbreeding, she showed that DNA is far more complicated than scientists originally thought

When you smell the roses, do they smell you back?

Most of your favorite flowers are mutants

Low-tech scientists are using their eyes, ears, and intuition to make important discoveries

My life in butterflies: how a childhood hobby shaped my career