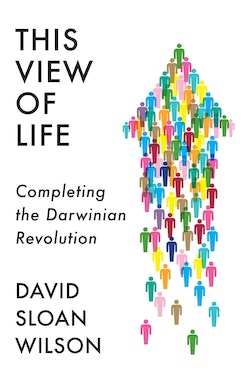 This View of Life: Completing the Darwinian Revolution

The idea of a world run by scientists is a conceit I — like many other scientists — have occasionally indulged in. It’s hard not to, in a world sleepwalking into climate catastrophe, governed by science denialists. But David Sloan Wilson, a professor of biological sciences and anthropology at Binghamton University, not only indulges in such fantasies, he argues for them. In his new book, “This View of Life: Completing the Darwinian Revolution,” Wilson suggests that the framework of Darwinian evolution could even be a kind of cure-all for 21st century problems like globalization and automation.

Of course, this sets off all sorts of alarm bells about "social Darwinism," the 19th century idea that socially powerful individuals are innately better than weaker ones, which underpinned early 20th century theories of race, justified colonialism, and rationalized eugenics and Nazi-ism. Wilson is at least cognizant of this connotation, and in fact spends a whole chapter early in the book trying to persuade the reader that Nazis (and the eugenics movement) were actually not "social Darwinists." He claims that social Darwinism was not a term adopted by eugenicists, but in fact used as a pejorative by their opponents. This is a bizarre argument; regardless of who came up with the label, the shoe fit. In fact, it was Darwin’s half-cousin, Francis Galton, clearly inspired by Darwin’s work, who sparked the eugenics movement, coining the term, and promoting the idea that eugenically "compatible" couples should be given incentives to marry and procreate. A modern understanding of evolution and genetics utterly refutes eugenicist ideas — but nevertheless, it's important to not whitewash the field’s grim history.

Unfortunately, this is just the first in a whole series of missteps. Wilson suggests that an “evolutionary worldview” can solve many problems of public and social policy, from public education to running an effective business. It’s an argument that leads him to broaden the definition of evolution far beyond what most scientists would be comfortable with.

The most enjoyable part of the book is the beginning, where Wilson gives a cogent and engaging overview of evolution by natural selection. I particularly liked the description of one my favorite experiments of all time: The E. coli long term evolution experiment, which was started over thirty years ago by Prof. Richard E. Lenski at Michigan State University. The experiment, which deserves a book in its own right, tracks in real-time the evolution of independent lineages of a single E. coli cell, and has resulted in several groundbreaking discoveries.

But Wilson next applies biology to policy, describing such emerging problems as the effect of screens on child development. He suggests that policies to counter these problems should be based on biology. I think pretty much every policy expert agrees, but biology can't be extrapolated into a one-size-fits-all solution for all problems.

A similar lack of even-handedness troubles the rest of the book, such as, for example, when Wilson tries to explain the evolutionary origins of altruism. This is a longstanding problem in evolutionary theory, first recognized by Darwin himself. However, the solution Wilson champions, called multilevel selection (formerly known as group selection) has been rejected (or at the very least, long debated) by evolutionary biologists. Group selection suggests that sometimes evolution results in the survival of fitter groups, instead of just fitter individuals. Hence, groups with more altruistic individuals are more likely to survive, explaining the persistence of altruism in numerous species. The trouble is, there is no experimental evidence that this is true.

A more-widely accepted theory is called kin selection, or inclusive fitness, which essentially suggests that individuals are more likely to help other individuals who are genetically similar to themselves, i.e. their close relatives. This theory has more evidence on its side, and is more consistent with other aspects of modern evolutionary theory. Wilson, however, does not see fit to explain that the logic guiding his entire book is based on a hotly contested idea.

Wilson also frequently reveals shortcomings in his knowledge of other areas of biology. For example, he writes, "We already know that trying to blast bacterial diseases with antibiotics merely results in the selection of resistant strains.” This is a gross misrepresentation of the current best knowledge about antibiotics, and the grave global problem of antimicrobial resistance (AMR). (It's often the use of low doses of antibiotics, or other misuse that creates environments for resistance to emerge.) Wilson also oversimplifies cancer treatment, promoting adaptive therapy (essentially allowing some cancer cells to survive so their presence suppresses the growth of more aggressive, chemotherapy-resistant cancer cells, theoretically prolonging the life of the patient) over aggressive chemotherapy simply because it fits his view of evolution. (Currently, there's a dearth of clinical trials actually comparing adaptive and aggressive chemotherapy regimens).

A few lines later, in typically presumptuous form, Wilson advises cancer researchers to study “larger and longer-lived species that suppress cancer well” in order to design better therapies. Readers will be relieved to learn that researchers have in fact been doing this since 1977, when the Oxford epidemiologist Richard Peto observed that animals with more cells don’t necessarily have higher incidences of cancer.

But from the start...there's an air of triumphal self-congratulation throughout the book

Having thus handily dispatched the intractable problems of antibiotic resistance and drug-resistant cancer, Wilson retrofits policy successes in other fields to his view of cultural evolution. While I’m confident that the designers of Toyota car assembly plants did not have evolutionary theory on their mind, Wilson sees nothing wrong with comparing Toyota’s successes with the behavior of a multicellular organism. This kind of explanation, rooted in multilevel selection theory, can lead to less benign conclusions.

Wilson, for example, rationalizes human morality as a process that can be explained by competition between groups, an idea misapplied from group selection theory. He ends up idealizing the coerciveness this competition demands, ignoring many examples where this has caused harm. Like slavery in America, caste politics in India, or anti-LGBT laws in much of the world, competition between different social groups has repeatedly proven to be far from the positive evolutionary ideal Wilson suggests.

The real tragedy is that by stretching the definition of evolution itself so far beyond its biological reality, Wilson destroys its elegance

But from the start — where Wilson exhorts readers to take what they know about evolution and “move it to one side to make room” for his ideas — there's an air of triumphal self-congratulation throughout the book. If this review seems harsher than necessary, it’s because the book reads like a mishmash of self-help book and management textbook, with a healthy dose of Deepak Chopra-ish mangling of scientific concepts. I strongly recommend against it.

The real tragedy is that by stretching the definition of evolution itself so far beyond its biological reality, Wilson destroys its elegance. Evolution by natural selection is biology’s “theory of everything.” It explains the fundamental principles that allow single-celled organisms to morph into the diversity of fauna and flora that we see today. But miraculous as it is, what evolutionary theory does not do — no matter how much Wilson would like it to — is explain every quirk of behavior by every cell. That task falls to individual biologists like myself, working in myriad disciplines, to try to understand how different organisms work.

If there’s anything the author and I share, it’s an unbridled awe at the grandeur of Darwinian evolution, and it’s unfortunate that his book simply diminishes mine. It's a volume that should, I think, be consigned to the deepest, dustiest shelves.

Animals, plants, and even some bacteria use hypodermic needles

Has evolution changed? Asking experts how Darwin's theories hold up in modern science

Fungi create genes to "win over" their plant friends and neighbors

Wild Goffin's cockatoos can use tools, too

Probiotics, not antibiotics, might be the future of livestock farming